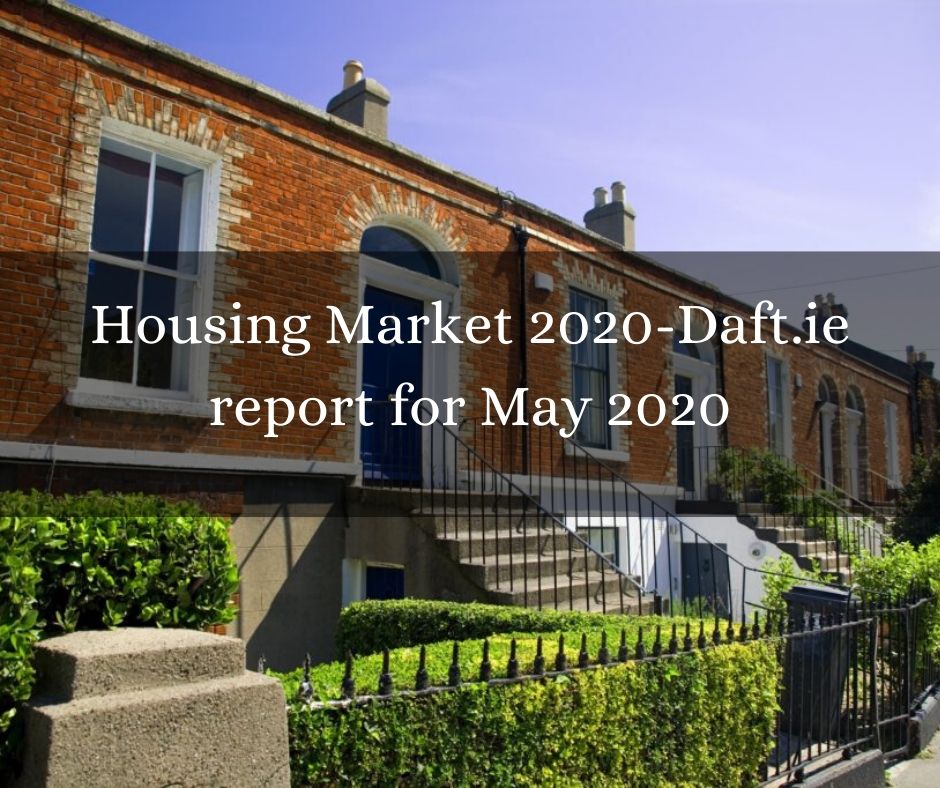 Housing Market for May 2020-Dramatic Falls and New Horizons in Daft.ie’s report

Daft.ie have recently released a new report on the housing market from the last two months, and figures show there was a dramatic decrease in the number of homes for sale, rental prices, and new sales ads during the month of April. This comes as no shock, as the Covid-19 pandemic which has engulfed the country into a lockdown for the entire month of April and May was guaranteed to cause havoc in the property market.

There was a slight rebound in May, according to their report, but that was only partly compensating for the fall of 5.5% seen between March and April. A fall of more than 5% is quite exceptional; during the 2007-2012 crash, there was only one month – October 2011, when prices dropped 4.1% – that came close to that figure. Remarkable, isn’t it?

As we come out from lockdown and begin to re-open our economy, Daft’s findings breaks down the good, the bad and the ugly on what exactly happened in the market over the last few months.

For the whole country, the report reveals that sales prices dropped during the lockdown in May, where they were an average 1.6% lower compared to the previous year. Rental prices were 0.7% higher.

In Dublin, rents did not change year-on-year, but sales prices in May were 1.2% lower than the previous 12 months.

The month of April saw significant falls during the height of lockdown, but large bounce-backs in May. The average listed sale price nationwide rebounded by 3.7% in May, having fallen by 5.5% in April.

According to the report, the soar in prices in May is the biggest one-month increase since early 2015. The bounce back is certainly significant, as the fall in April, when a full lockdown came into effect, was the largest decrease on record (records date back to January 2006). The record previously belonged to the fall in October 2011 where prices dropped by 4.1%.

More rural areas faced a higher level of instability in listed prices during April and May: while prices fell by 1% on average in Dublin in both months, Connacht-Ulster had a different story. Prices fell by 12% in April in those regions before rising back up by 8% in May.

It’s safe to say, the whole country experienced a fluctuation in house prices during those two months of lockdown.

Prices were not the only thing that dropped during those two months. The total number of homes available for sale nationwide on 1st June was 18,761, the lowest since October 2006 and a fall of 28% in just eight months.

As sales prices and the number of sales listed dropped, so did new sales ads. There was a dramatic decrease of 74.2% in the number of new sales ads listed compared to the pervious year. That is just 4,000 homes that were listed for sale nationwide during April and May 2020. For perspective there were 15,000 homes listed for sale during April and May 2019.

Rental prices nationwide did fall 2.1% in April. When compared to March, this is a substantial fall, although far less than was seen in the sales market. The 2.1% fall in rents was the largest one-month fall in average rents nationwide in 7 years, according to the report. It marks only the eighth time in nearly seven years that the average monthly rent fell. There were also decreases in Dublin, with May rents 2.5% lower than they were in March.

The largely unchanged availability of rented homes nationwide hides significant differences across the country. In Dublin, availability of homes to rent is up 47% while in the rest of Leinster and in Munster, availability has fallen by roughly one third compared to a year ago.

In terms of the number of homes listed for rent, nearly 5,300 homes were listed during May, with almost 2,900 of those in Dublin – the highest one-month total for rental listings in the capital since August 2015, according to the report.

Elsewhere in the country, however, fewer homes were listed to rent during May – although the fall-off was far smaller than in the sale segment, ranging from 8% in Connacht-Ulster to 27% in Leinster (outside Dublin).

“The latest figures from the housing market shows clear differences in how sale and rental markets are responding,” according to Ronan Lyons, economist at Trinity College Dublin and author of the report.  “Sale markets have been more volatile – something to be expected given the role confidence plays in making a home purchase. Rental markets have been steadier but are also pointing to lower rental levels.” As the country opens up again and emerges from the lockdown, the report tells us that the coming Summer months will be significant and will allow us to assess the economic damage on the property market, as well as the damage that lasts beyond lockdown. The greater that damage is, the more likely it is that both sale and rental markets will indeed seek out a new lower price level in the months ahead.